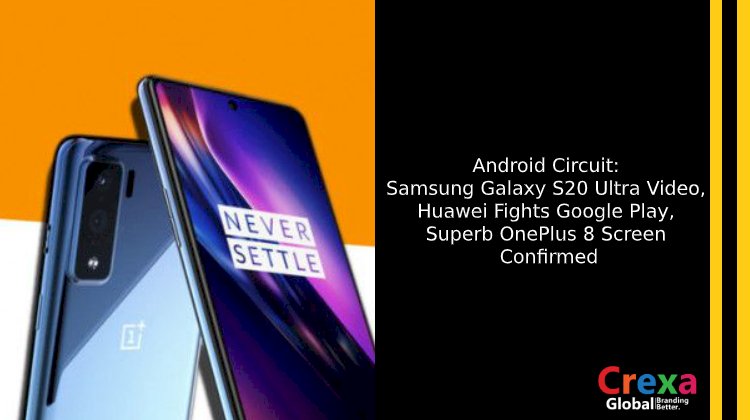 Android Circuit is here to remind you of a few of the many things that have happened around Android in the last week (and you can find the weekly Apple news digest here).

Samsung is preparing three next-generation Galaxy S models for its ‘Samsung Unpacked’ event on February 11th. These are widely expected to be the Galaxy S20, S20+, and S20 Ultra. How are they shaping up? Zach Epstein looks over the range, including the latest benchmarking:

“…the results of a Geekbench 5.1 benchmark test performed on a Samsung smartphone with the model number SM-G986U. Thanks to earlier leaks that have now been confirmed, we know that this phone is the Snapdragon 865-powered Galaxy S20+ that will be released in the US and China. So, how does the phone do on this popular benchmark test? Very well, in fact — the Samsung Galaxy S20+ scored a 923 on the single-core test and a 3267 on the multi-core test.”

More at BGR. As to the Galaxy S20 Ultra, the top of the range handset, the teams at Let’s Go Digital and Concept Creator have put together a video of the model based on the leaks and specifications we already know.

Before we get to the Galaxy S20, there’s the small matter of the Galaxy S10 Lite. Launched weeks before the S10 becomes the older model, the big question is not if it is a good Samsung phone (it is) but where it fits in with the other S10 models. Mike Lowe addresses that question at the start of his review:

"However, look over the Lite's specs compared to the 'normal' S10 and you'll probably be left baffled: both offer full-fat Qualcomm Snapdragon 855 processors, the Lite has the larger screen of the two, and a more enticing camera proposition. In that regard, the so-called Lite is only really trumped by the S10+ model.

"In short: the Lite's position makes the Galaxy S10 range all the more convoluted. Where it fits doesn't make a great deal of sense. Plus, watering down the flagship range from Samsung is just, well, confusing from a buyer’s point of view."

We’re also expecting Samsung to launch a new folding phone at the February event. Will it be the Galaxy Fold 2? It now feels unlikely. With a new form factor comes a new distinctive name - the Galaxy Z Flip - as I reported earlier this week:

"It’s clear from the design why ‘Flip’ is better than ‘Fold’ as a name. It clearly communicates to the market what sort of device this is. Flip phone is a pretty much universal term - especially in the US market - and I can easily see the ‘Z’ being prominent at the launch but being pushed away in day to day usage reducing this to the Galaxy Flip, much like the Galaxy Fold.”

Last year saw OnePlus introduce it ‘Fluid Motion’ display on the OnePlus 7 family of handsets. Although the Shenzhen-based company has not talked publicly about the 2020 line-up, it has confirmed that an upgraded screen will be available, as I reported earlier this week:

"OnePlus has confirmed a key specification for its 2020 handsets, the presumptively named OnePlus 8 family. It will be upgrading the fast and responsive screens up from 90 Hz to 120 Hz.

"…What do we know about these new screens? We’re looking at an AMOLED panel, supplied by Samsung Display; a Quad HD+ resolution; the touch response is also raised (to 240 Hz); brightness is over 1000 nits; and the panel is a 10-bit panel.”

A Mysterious Nokia Handset Is Certified

Although its handsets have been updated over the air to Android 10, HMD Global has its first handset certified with Android 10 out of the box. Picked up by the 91mobiles team, the handset packs a SnapDragon 665 chip and is expected to initially launch in the BRIC markets:

"The Nokia TA-1234 had initially appeared on the Russian EEC certification, following which it has now cleared Wi-Fi certification under India’s BIS. This suggests that the smartphone will be launched in at least these two markets. However, nothing much else is known about the mystery mid-range Nokia smartphone, and no particular leaks regarding HMD Global’s upcoming smartphones quite match the description of this particular device.

“Given the timeline of the device’s appearance on certification sites, it is likely that HMD Global will unveil the smartphone during at MWC 2020 this February."

Excitement Over The (Not A Smartphone) Surface Duo

Microsoft may not call it a smartphone, but if the Surface Duo walks the walk and talks the talk, a lot o people are going to call the dual-screened machine a smartphone. Could it be the most exciting Android-powered smartphone of 2020? Jay McGregor thinks so:

"There’s a sort of no-nonsense air to the Duo. It’s a foldable phone without the flexible display. It’s offering a shortcut to the functionality that the Fold, Razr and others offer without the snazzy screen- and honestly, I’m OK with that. That attitude should be carried throughout the device. Forget the gimmicks and focus on the essentials - if there’s a cost saving from not using flexible screens, pass it on to the consumer. Two displays? Make the battery abnormally large and turn it into a battery life powerhouse.”

More on the Surface Duo here.

As Huawei works around the US trade ban that isolates it from using Google Mobile Services, it is stepping up its presence with developers. This week it spoke about the Huawei Mobile Services (HMS) at a presentation in London. Mike Moore reports:

"The company says it has already signed up 55,000 apps using HMS Core, which is free to register for and use, with the 24 developer kits enabling nearly a thousand APIs to use.

"Huawei says its AppGallery currently attracts 400 million MAU (monthly active users), and the company is looking to build more links to its other mobile services to encourage connectivity. The likes of the Huawei Browser (270 million MAU) and Assistant (180 million MAU) were named as being among the apps being connected, with more to come in the future.”

Following the EU anti-trust ruling, Google will be offering alternative search engines to its own when users set up their Android devices. Curiously, Google has auctioned these spaces and invited bids from search engines looking to be placed, rather than the more logical ‘which search engines are popular in this region. That has caused many to call out the practice. James Vincent reports:

"When Google announced the auction system last August, rival search providers were not happy. Eric Leandri, CEO of privacy-focused search engine Qwant, said it was a “total abuse of [Google’s] dominant position” to “ask for cash just for showing a proposal of alternatives.” Gabriel Weinberg, CEO of DuckDuckGo, said the auction system was a “pay-to-play auction” that meant “Google will profit at the expense of the competition.”

"The CEO of Ecosia, a search engine that uses its profits to plans trees, boycotted the auction entirely. In a press statement, its CEO and founder Christian Kroll said Google’s decision was “at odds with the spirit of the July 2018 EU Commission ruling.” Kroll said Ecosia would be raising its concerns “over Google’s monopolistic behaviour with European Union legislators.” "

More at The Verge.

Android Circuit rounds up the news from the Android world every weekend here on Forbes. Don’t forget to follow me so you don’t miss any coverage in the future, and of course read the sister column in Apple Loop! Last week’s Android Circuit can be found here, and if you have any news and links you’d like to see featured in Android Circuit, get in touch!

4 Social Media Marketing Mistakes Every New Business Makes (And How To...

India Towards Global Leadership in E-Commerce